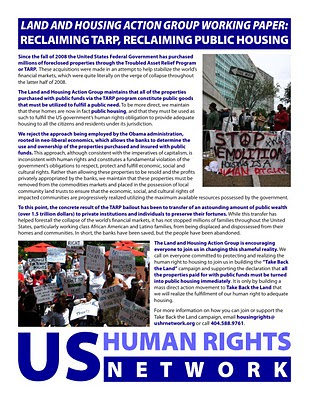 Since the fall of 2008 the United States Federal Government has purchased millions of foreclosed properties through the Troubled Asset Relief Program or TARP. These acquisitions were made in an attempt to help stabilize the worlds financial markets, which were quite literally on the verge of collapse throughout the latter half of 2008.

The Land and Housing Action Group maintains that all of the properties purchased with public funds via the TARP program constitute public goods that must be utilized to fulfill a public need. To be more direct, we maintain that these homes are now in fact public housing, and that they must be used as such to fulfill the US government’s human rights obligation to provide adequate housing to all the citizens and residents under its jurisdiction.

We reject the approach being employed by the Obama administration, rooted in neo-liberal economics, which allows the banks to determine the use and ownership of the properties purchased and insured with public funds. This approach, although consistent with the imperatives of capitalism, is inconsistent with human rights and constitutes a fundamental violation of the government’s obligations to respect, protect and fulfill economic, social and cultural rights. Rather than allowing these properties to be resold and the profits privately appropriated by the banks, we maintain that these properties must be removed from the commodities markets and placed in the possession of local community land trusts to ensure that the economic, social, and cultural rights of impacted communities are progressively realized utilizing the maximum available resources possessed by the government.

To this point, the concrete result of the TARP bailout has been to transfer of an astounding amount of public wealth (over 1.5 Trillion dollars) to private institutions and individuals to preserve their fortunes. While this transfer has helped forestall the collapse of the worlds financial markets, it has not stopped millions of families throughout the United States, particularly working class African American and Latino families, from being displaced and dispossessed from their homes and communities. In short, the banks have been saved, but the people have been abandoned.

The Land and Housing Action Group is encouraging everyone to join us in changing this shameful reality. We call on everyone committed to protecting and realizing the human right to housing to join us in building the “Take Back the Land” campaign and supporting the declaration that all the properties paid for with public funds must be turned into public housing immediately. It is only by building a mass direct action movement to Take Back the Land that we will realize the fulfillment of our human right to adequate housing.

For more information on how you can join or support the Take Back the Land campaign email housingrights@ushrnetwork.org. Or call 404.588.9761.
Posted by Kali Akuno at 10:21 AM 3 comments: