Short Commentary Reflections on the 2016 RNC/DNC and Electoral Politics 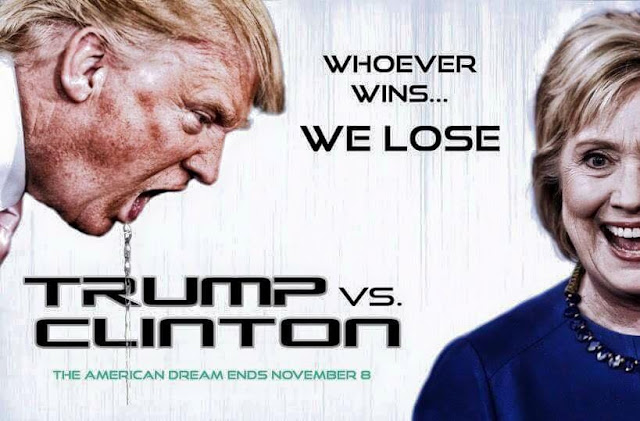 Friday, July 22nd, 2016
The US Left must get prepared to fight on two fronts simultaneously from here on out. On the one hand, we must get prepared to fight the advance of an emergent white supremacy, in its fascist form, which might in fact be even more virulent and violent if Trump doesn't win. And on the other hand, we better get prepared to fight the most aggressive and malicious form of neo-liberal and neo-conservative governance Wall Street can buy, which will be fiercely adverse to any resistance from the left.
Clarity of vision and clarity regarding our position are absolutely needed to chart clear paths of effective, autonomous resistance in the days ahead.
Which conversely means all those who support the DNC and the coronation of HRC are apparently "well adjusted" supporters of the US settler-colonial project and its mission of imperialist conquest and domination.

Tuesday, July 26th, 2016
I love how the Corporate media, of both flips of the bourgeois coin, so easily reduce the struggles being waged by Bernie delegates down to psychological issues, particularly issues of "adjustment."

Thursday, July 28th, 2016
From Candice Rose "Your privileged if you think imperialism is gonna work for you!!"

Thursday, July 28th, 2016
On the Fascist fear mongering being Waged by the Democrats: We are being asked to fight the threat of Fascism being imposed upon everyone (meaning a larger proportion of white people drawn from the petit bourgeois class and the professional sectors of the working class) within the territories claimed by the US government versus accepting its ACTUAL perpetuation against the colonized, subjugated and exploited people's and classes contained within those same borders (i.e. the overwhelming majority of Indigenous, New Afrikan, Xican@/Mexican@, Borinquen, Hawaiian, etc.).


Let's be clear about the illusion of choice as it relates to the totality of the social relations and social dynamics in this empire. There has never been "democratic space" for some, and only limited "democratic space" for many (ending capitalism, colonialism, and imperialism is not and will not be on a ballot). Weather the right populist wins or the neoliberal warhawk wins, what "democratic space" remains is going to be further restricted, as it has been by all branches of the settler-colonial state since 2001 (and long before).
We must not forget, nor forgive, the constant and utter TERROR that many of us are structurally constrained by and live with every second of our lives out of fear of being fired and made homeless, of being locked down or lynched by a settler mob or the police, or set up, disappeared or assassinated by the FBI, DEA, ATF, Border Patrol, and Homeland Security, and much more at the hands of the bosses and big brother. The promotion of Fear (Trump is the Devil incarnate) or the Glorification of US Imperialism (the police are our heroes and the military is the greatest treasure of the empire) won't absolve the cold reality.
And let's also be honest with ourselves, the strategy of supporting the lesser evil over the past 50 years has only pushed an already reactionary settler-colonial society, further and further to the right. If we are going to do anything to reverse this historic trajectory, revolutionary forces are going to have to do some things we have failed do since the 1950's and 60's, and that is paint a clear picture of an alternative future, organize millions of people to not only to support it, but to autonomously implement its programmatic features, and to fight like hell to overturn the liberal bourgeois order and all its deviations.
Posted by Kali Akuno at 8:46 AM No comments:

The Myth of American Democracy, Part 1.

"After Dallas", on Laura Flanders Show