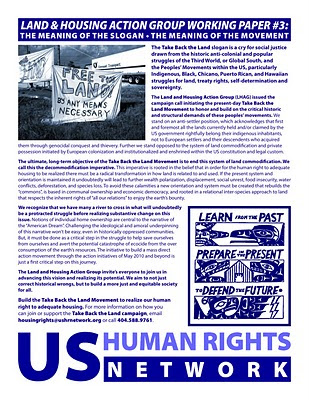 The Take Back the Land slogan is a cry for social justice drawn from the historic anti-colonial and popular struggles of the Third World, or Global South, and the Peoples’ Movements within the US, particularly Indigenous, Black, Chicano, Puerto Rican, and Hawaiian struggles for land, treaty rights, self-determination and sovereignty.

The Land and Housing Action Group (LHAG) issued the campaign call initiating the present-day Take Back the Land Movement to honor and build on the critical historic and structural demands of these peoples’ movements. We stand on an anti-settler position, which acknowledges that first and foremost all the lands currently held and/or claimed by the US government rightfully belong their indigenous inhabitants, not to European settlers and their descendents who acquired them through genocidal conquest and thievery. Further we stand opposed to the system of land commodification and private possession initiated by European colonization and institutionalized and enshrined within the US constitution and legal custom.

The ultimate, long-term objective of the Take Back the Land Movement is to end this system of land commodification. We call this the decommodification imperative. This imperative is rooted in the belief that in order for the human right to adequate housing to be realized there must be a radical transformation in how land is related to and used. If the present system and orientation is maintained it undoubtedly will lead to further wealth polarization, displacement, social unrest, food insecurity, water conflicts, deforestation, and species loss. To avoid these calamities a new orientation and system must be created that rebuilds the “commons”, is based in communal ownership and economic democracy, and rooted in a relational inter-species approach to land that respects the inherent rights of “all our relations” to enjoy the earth’s bounty.

We recognize that we have many a river to cross in what will undoubtedly be a protracted struggle before realizing substantive change on this issue. Notions of individual home ownership are central to the narrative of the “American Dream”. Challenging the ideological and amoral underpinning of this narrative won’t be easy, even in historically oppressed communities. But, it must be done as a critical step in the struggle to help save ourselves from ourselves and avert the potential catastrophe of ecocide from the over consumption of the earth’s resources. The initiative to build a mass direct action movement through the action initiatives of May 2010 and beyond is just a first critical step on this journey.

The Land and Housing Action Group invite’s everyone to join us in advancing this vision and realizing its potential. We aim to not just correct historical wrongs, but to build a more just and equitable society for all.

Build the Take Back the Land Movement to realize our human right to adequate housing.

For more information on how you can join or support the Take Back the Land campaign, email housingrights@ushrnetwork.org or call 404.588.9761.
Posted by Kali Akuno at 1:20 PM 15 comments: 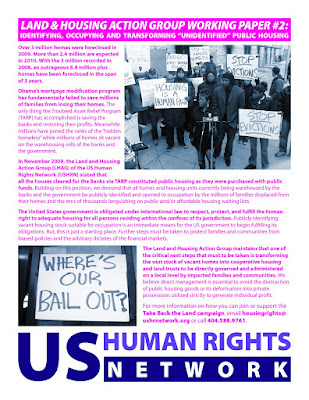 Obama’s mortgage modification program has fundamentally failed to save millions of families from losing their homes. The only thing the Troubled Asset Relief Program (TARP) has accomplished is saving the banks and restoring their profits. Meanwhile millions have joined the ranks of the “hidden homeless” while millions of homes sit vacant on the warehousing rolls of the banks and the government.

In November 2009, the Land and Housing Action Group (LHAG) of the US Human Rights Network (USHRN) stated that all the houses cleared for the Banks via TARP constituted public housing as they were purchased with public funds. Building on this position, we demand that all homes and housing units currently being warehoused by the banks and the government be publicly identified and opened to occupation by the millions of families displaced from their homes and the tens of thousands languishing on public and/or affordable housing waiting lists.

The United States government is obligated under international law to respect, protect, and fulfill the human right to adequate housing for all persons residing within the confines of its jurisdiction. Publicly identifying vacant housing stock suitable for occupation is an immediate means for the US government to begin fulfilling its obligations. But, this is just a starting place. Further steps must be taken to protect families and communities from biased policies and the arbitrary dictates of the financial markets.

The Land and Housing Action Group maintains that one of the critical next steps that must to be taken is transforming the vast stock of vacant homes into cooperative housing and land trusts to be directly governed and administered on a local level by impacted families and communities. We believe direct management is essential to avoid the destruction of public housing goods or its deformation into private possessions utilized strictly to generate individual profit.

The Land and Housing Action Group calls on all those of good conscience to join us in raising the demand that all vacant housing purchased with pubic funds be identified as un-utilized public housing stock and employed immediately to provide housing to those in need. The realization of the human right to housing in the United States demands no less. Build the Take Back the Land Movement to realize our human right to adequate housing.

For more information on how you can join or support the Take Back the Land campaign, email housingrights@ushrnetwork.org or call 404.588.9761.
Posted by Kali Akuno at 1:16 PM No comments:

Groups Take Back the Land During May 2010 Month of Action

May 3, 2010- Today, the Take Back the Land Movement (TBLM, www.takebacktheland.org) announced a May 2010 Month of Action in direct response to the ongoing economic and housing crisis. The month of action commemorates the 50th anniversary of the first Civil rights era sit-ins in Greensboro, NC. Thousands from across the country will participate in “live-ins” to demand the fundamental human right to housing. Groups in over a dozen cities across the country will move families into vacant government-owned and foreclosed homes, without permission, or physically defend families from eviction and foreclosure.

The objective of the coordinated civil disobedience campaigns is to build a national movement to elevate housing to the level of a human right and gain community control over land.

“We are defending families facing eviction and moving homeless people into people-less homes,” said Max Rameau of Take Back the Land. “While banks enjoy bailouts, executive bonuses and record profits, human beings and entire communities are suffering. The government does not appear interested in helping poor people, so we have no other choice.”

The TBLM is a network of community organizations or initiatives committed to community control over land and housing as a human right. The Movement receives national staffing and administrative support from the US Human Rights Network (ushrnetwork.org) and is organized in conjunction with the Poor People's Economic Human Rights Campaign (PPEHRC) (economichumanrights.org), an organization with a long history of housing takeovers and defenses.

Right 2 Survive, a Portland, Oregon based which empowers un-sheltered persons, seized control of a vacant lot in front of a long abandoned high school at 531 SE 14th Ave. in South Portland on May 1. Media coverage of the action is available at right2survive.wordpress.com and takebacktheland.org.

In Toledo, OH, Keith Sadler of Stony Ridge is due to be evicted from his home today (May 3). But Mr. Sadler intends to resist the foreclosure and stay in his home. “I am resisting this eviction through non-violent civil disobedience,” stated Sadler. “It's time to make a stand against this corrupt system.” The Toledo Foreclosure Defense League, a Northwest Ohio coalition of anti-foreclosure activists, will stand by Mr. Sadler to defend his home. Sadler and the Toledo Foreclosure Defense League will peacefully occupy the foreclosed home by sealing themselves inside until the foreclosure is called off and a moratorium on all residential foreclosures is enacted. A live video feed from inside the house will be provided online.

Actions are also expected on May 3rd in Chicago, IL, where the Chicago anti-eviction campaign is protesting the HUD offices, 77 W Jackson, at 11:00am, and in Philadelphia, PA by the Kensington Welfare Rights Union. Throughout the month, actions are expected in every region of the country, including in the:

Details about upcoming actions are available at www.takebacktheland.org.

Housing is a fundamental human right protected by Article 25 of the Universal Declaration of Human Rights (UDHR), Article 11 of the International Covenant on Economic, Social, and Cultural Rights (CESCR), and Article 5 of the International Convention on the Elimination of All Forms of Racial Discrimination (CERD), amongst others. In the context of the severe housing crisis and the multi-billion dollar bailout of the financial industry, participating organizations demand the US government enforce their international responsibilities and obligations to protect and fulfill this basic human right.

Take Back the Land - Miami started in October 2006 by seizing control over a vacant municipal lot in Miami, FL and building the Umoja Village Shantytown. Subsequent campaigns resulted in “liberating” and moving families into foreclosed homes, without permission from the banks.

The Poor People's Economic Human Rights Campaign was founded in 1998 and is committed to unite the poor across color lines as the leadership base for a broad movement to abolish poverty by advancing economic human rights as named in the Universal Declaration of Human Rights, such as the rights to food, housing, health, education, communication and a living wage job.

Take Back the Land (www.takebacktheland.org)