Posted by Kali Akuno at 4:43 PM No comments:

Speech at Every 36 Hours Community Forum and Strategy Session on Saturday, October 20th, 2012 in Atlanta, GA

Posted by Kali Akuno at 9:45 AM No comments:

Kali Akuno at Everything for Everyone Festival - Seattle, WA (August 2012)

Posted by Kali Akuno at 9:43 AM No comments:

Reflections and Lessons on the Interactions between the United Nations, National-States, and Social Movements at the Rio + 20 Summit 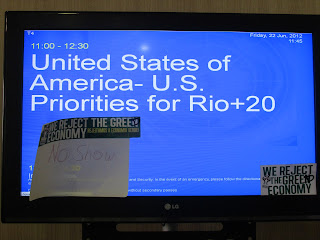 The United Nations Conference on Sustainable Development, better known as Rio+ 20[1], held in Rio de Janeiro, Brazil from June 13th to 22nd, was officially a gathering of the representatives of the national-states that comprise the United Nations and major international NGO's (non-governmental organizations) to do the following:

The outcome of conference was decidedly mixed. The social movements and nation-states of the Global South/Third World did not surrender the critical positioning stated in the Rio principles, but they did not gain any new ground either. The transnational corporations and industrialized nations were not able to weaken the Rio Principles, nor impose their version of the "Green Economy" on everyone, but they were able to advance a number of side initiatives designed with the intent of dividing the developing countries and social movements. The major battles over the future of the biosphere and survival of humanity were therefore forestalled.

The question is, for how long? 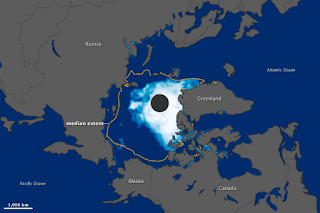 On July 19th an iceberg twice the size of Manhattan island was reported to have broken off from the Peterman glacier in Greenland[2]. On July 25th NASA reported that an unprecedented 97% of the Greenland ice sheet melted[3]. On September 19th NASA reported that the Artic Polar Ice Sheet was the lowest since records started being systematically kept in the 1970’s[4]. On October 2nd, the BBC News reported that the Great Barrier Reef of the coast of Australia lost more than half of its Coral cover and mass over the past 27 years[5]. Further still, scientists have confirmed that the past two years have witnessed some of the most extreme weather conditions in recorded history[6]. Without a shadow of a doubt, climate change is here and in full effect. 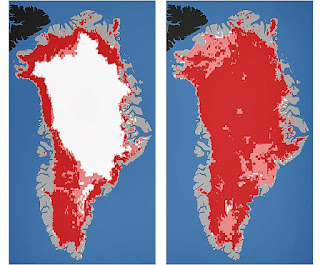 Given the real and present economic impacts of climate change in the United States, including water rationing, crop and livestock loss, property loss, and price increases on food and energy consumption, one would expect that the issue would be a center piece of the current political debates, particularly the Presidential ones. Instead of a lively, rigorous debate about the impact of the change and what can and need be done to address it, what we get are uninspired acknowledgements of the problem from the politicians and the media, followed by business as usual.

Elites in the United States are not alone in their aversion of reality. This attitude and outlook was recently on gross display at Rio + 20. At the Summit, the social movements, particularly the Indigenous movements, struggled intensively to draw the world’s attention to the gravity of the crisis. But in the end, the vast majority of the governments, the Bretton Woods Institutions (i.e. the World Bank, IMF, and WTO), transnational corporations, and other elite forces preceded with a business as usual attitude.

As the Indigenous movements remind us, climate change is not a race and people neutral phenomenon. It is no accident that the frontline communities in the battle against climate change and its primary perpetrators are Indigenous and other marginalized and oppressed peoples, like peoples of African descent and Latinos in the United States. Recognizing the impact of climate change, habitat loss, etc., on these communities is to acknowledge the cold and brutal reality of environmental racism. 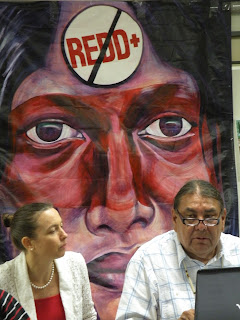 As the facts cited above clearly indicate, it is no longer radical to say that business as usual is no longer an option. We do not live in a world of infinite resources, and we have to stop acting as if we do. We must jettison the system of perpetual economic growth that currently dominates human social relations and the philosophy that guides it, or risk destroying ourselves and hasten another mass extinction event. We have to change and change immediately. We have to start by expanding and institutionalizing renewable practices of production and consumption and building a massive social movement that alters the practices of governance and the operations of the transnational corporations that currently dominate the planet.

Ending environmental racism and fighting climate justice must be viewed as fundamental acts of self-defense.

The Stockholm Conference was an outgrowth of the international environmental movement of the 1950’s and 60’s. This movement stimulated the creation of Earth Day, which was first proposed at a UNESCO conference in San Francisco in 1969, and implemented in various forms for the first time in 1970[8].

A read of the outcome documents of the Stockholm Conference demonstrate how much the world has changed between 1972 and 2012, and in fact how much it has changed between 1992 and 2012. The Stockholm documents were clear on the question of the relationship between “development” and the systemic ills of white supremacy, colonialism, and unfettered capitalism. They were also clear on the interconnected nature of the world and its ecological systems, and how human social systems are dependent upon and must preserve these systems. They mandated that non-renewable resources be shared, and that the Earth’s capacity to regenerate renewable resources must be sustained. And this is just the beginning![9]

The clarity and strength of the Stockholm Conference documents reflects the radical political consciousness of the era, an era defined by the success of the national liberation movements in Africa and Asia, left leaning social movements in Latin America and Western Europe, strong anti-systemic movements in the United States (like the Black Power, Women’s and Anti-War Movements), and the relative political “balance” produced by the cold-war rivalry between the United States and the Soviet Union.

By the time of the Rio Conference in 1992, the world was a profoundly different place. The Soviet Union was weak and rapidly collapsing, most of the progressive governments that were the direct products of the national liberation movements of Africa and Asia had been rolled back, and large portions of Latin America were just emerging from dictatorships of the 1970’s and 80’s. The world was also firmly in the grip of the “Washington Consensus”[10], which imposed neo-liberal economic and social polices on the vast majority of the worlds governments through loans and conditions issued by the IMF and World Bank to pay off massive debts accumulated in the 1970’s and 80’s created in part by financial manipulations US banks, multinational corporations, and the United States Treasury department.

This new political reality produced the more watered down declarations and documents of the Rio Summit in 1992[11], as there were few progressive governments then remaining to seriously challenge the global agenda being imposed by the United States, its European and Japanese allies, and transnational corporations. The strength that is in the 1992 documents is largely there because of the pressure of the global social movements against Third World debt, neo-liberalism, and environmental racism and collapse that had (re)emerged in the late 1980’s. These movements were able to tactically collaborate (directly and indirectly) with the remaining progressive governments in United Nations to produce the critical documents that framed the 1992 Rio Earth Summit and its outcomes like Our Common Future and Agenda 21. 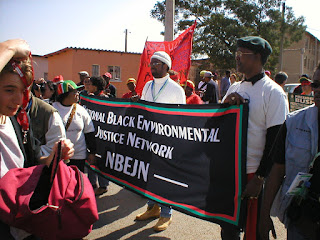 There are some critical lessons regarding how social movements collaborated with progressive (and even self-interested and not so progressive) governments concerning the 1992 conference that should not be forgotten by social activists in the United States. Many of these lessons were actually utilized and clearly on display at the Rio + 20 conference, particularly by social movements from Latin America and Indigenous movements globally. The Indigenous and social movements from Bolivia, Brazil and Ecuador effectively collaborated tactically with their progressive governments to spread their message and apply pressure on the rest of the nation-states in the United Nations, by putting on countless side events, strategic placement on plenaries, and powerful actions inside the Conference grounds and in the city of Rio and its surrounding communities as well.

But, these movements were also clear that their collaboration was fundamentally tactical and not strategic. It was not strategic in the sense that all of these movements were clear that their governments, while perhaps better than most, were also very ripe with contradictions on these critical questions and were themselves institutions to be struggled with.

Brazil is an excellent case in point. Brazil has a moderately progressive government, led by the Workers Party, which emerged as a powerful force of convergence for radical social movements in the 1980’s fighting against the military dictatorship[12]. In the latter part of the 1990’s, in order to have a shot at winning in the Federal elections, the Workers Party made some substantive compromises with the Brazilian bourgeoisie and elements of the transnational bourgeoisie (particularly is industrial faction). In essence, the Workers Party crafted a “New Deal” compromise with these forces, wherein it agreed to forge a national alliance between labor and capital in Brazil, one that would allow more of the surplus value produced in the society to be distributed to the working class and the peasantry in exchange for backing the domestic and international expansionist agenda of capital. As a result, Brazil over the past decade has emerged as one the key emerging markets and political players on the world stage (as evidenced by its leadership in the BRICS alliance and the G20).

In the context of the Rio + 20 Summit, the Brazilian government tried to have it both ways, that is be an ally and friend to the social movements of the world, the vast majority of the world’s governments, and those factions of transnational capital willing to engage the environmental agenda (albeit on their own terms). And it largely succeeded. But, what does success like this amount to? I would answer more of the same, which is the maintenance of the status quo, which is why the major battles over the future of the biosphere and survival of humanity were forestalled. 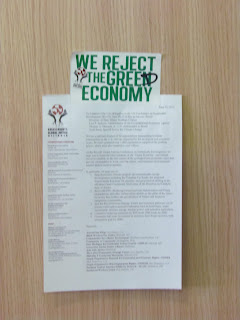 If there was on point that was clear from the Rio + 20 Summit, it is that the progressive social movements of the world, and not the national-states or the United Nations directly, are going to resolve the ecological crisis. Part of this resolution may or may not involve the United Nations. That remains to be seen. What is clear is that in the immediate future neither the national-state governments, nor the United Nations, are disappearing or dissolving any time soon. So, our movements must be strategic and figure when, where, and how it makes the most sense to engage these institutions to address aspects of this crisis, be it through collaboration or struggle. But, in order to do this our movements must find concrete ways to get stronger, broader, and deeper quickly if our species and many others are going to survive.

So, Let us act in our self-defense and act now.

For more in-depth background on the Rio + 20 Conference, the Rio Principles, Agenda 21, and the 2012 Outcome Document visit http://www.uncsd2012.org/. 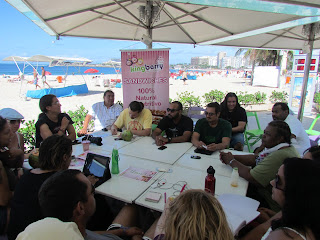