(2016) How to turn the Crisis of our time into Opportunity


Listen to "Trump Offers US Strategy of Peace Through Strength; Trans Military Ban" on Spreaker.
Posted by Kali Akuno at 5:49 AM No comments:

Project Eject, the People's Assemblies, and the Question of Autonomy 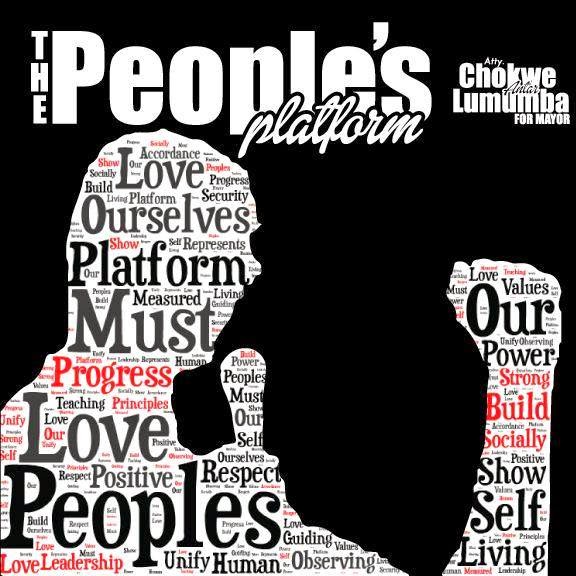 Many people throughout the United States have been inspired by the gains of the social movements in Jackson over the past decade. And many have been extremely confused and disappointed by the apparent “internal” strife that has erupted within and between factions of the progressive social movements in Jackson over the past several months. To everyone concerned about the social movements in Jackson and where they are headed, be you in Jackson or well beyond its confines, we ask you to try and not view these struggles as negative, but rather as growing pains. What some of us are now trying to demonstrate is how to hold our peer’s and ourselves accountable towards the development and implementation of a transformative program, i.e. the Jackson-Kush Plan. What we are trying to do is stop the right drift of our comrades - the types of political, ideological, and programmatic drifts we have sadly witnessed over and over again throughout the course of history with radical movements.
We are also trying to educate (and learn) through struggle via the means of engagement available to us and to a broader audience of interest. We have no interest in tearing anything we have worked to build down. Our interest is centered on seeing the aims of our labors come to fruition and not be negated by the logic of neoliberalism and its imperatives.
To this end, we want to note that there is a two-line struggle emerging over the question of the People’s Assembly in Jackson, Mississippi. One line maintains that the People’s Assemblies should fundamentally be vehicles of autonomous people-derived power. The other emerging line maintains that People’s Assemblies can be expressions of community engagement in collaboration with or under the direction of the municipal government (principally the Lumumba administration in this case).
One of the reasons why I maintain that People’s Assemblies must be autonomous political actors is expressed by the emerging struggle over “Project Eject” (Empower Jackson Expel Crime Together). Project Eject is the local iteration of the Department of Justice’s “reinvigorated” (their word) Project Safe Neighborhoods program, being pushed by President Trump and Attorney General Jeff Sessions. US Attorney for the Southern District of Mississippi, Mike Hurst, officially launched Project Eject on Thursday, December 7th in collaboration with the Jackson Police Department, the FBI, ATF, and other law enforcement agencies.
Despite the “community safety” rhetoric of the DOJ, Project EJECT has two primary purposes: 1) to contain the progressive social movements in Jackson (keep in mind that the DOJ recently threatened Jackson over its “sanctuary city” practices) and 2) to displace hundreds, if not thousands, of Black working class people from the city in the effort to gradually change its racial and political composition. We need to be clear on this, and get this point through to the Black middle class forces that appear to be collaborating with the DOJ on this program. Their class biased efforts to support "tough on crime" measures, rather than pushing for a people-centered program of self-determination, actually weakens the overall political strength of Black communities like Jackson (witness the demise of Black electoral power in Atlanta, Georgia after decades of promoting neoliberal housing and “safety” policies by the Black political elite that have gentrified the city and displaced tens of thousands of Black working class residents/voters). And further, we have to get the community as a whole to see that the launch of Project Eject is part of a deliberate effort targeting Jackson. Rather than being an isolated incident, this move is a continuation of the raids against the immigrant community that occurred in the spring and more recent threats to retract federal funding from Jackson if it does not terminate its human rights protection measures that make our city a type of “sanctuary city”.
Project Eject maybe an extension of “crime prevention” programs that were in place before the Lumumba Administration came into office, and therefore may take some time and difficulty to dismantle. As a result, the Lumumba administration maybe constrained in what it can and cannot say publicly in regards to the program at present. This is where an autonomous or independent People’s Assembly should come into play. An autonomous Assembly could raise its voice in rage against this utterly reactionary program and organize and lead a campaign to dismantle it. But, an Assembly that is in part directed by the Mayor and his administration, as the Assembly held on November 28th was oriented, is and will be constrained in its ability to speak or act against something the Mayor is either supporting (we know JPD Chief Lee Vance is in support) or otherwise constrained in opposing publicly.
As noted, Project Eject is a direct threat to the social movements of Jackson. So, silence from any quarter in this case is a form of consent and concrete agreement with the political program and project of Donald Trump and Jeff Sessions. Project Eject must be resisted and defeated. And we have to build the political vehicles to do so immediately. We hope the People’s Assembly effort being lead by the Democratic Visioning Committee will engage in this effort.
Posted by Kali Akuno at 5:38 AM No comments:


From the Black Agenda Report https://blackagendareport.com/cooperation-jacksons-kali-akuno-elections-dont-necessarily-change-damn-thing

A key strategist among the Black radicals that were behind the election of two Black mayors in Jackson, Mississippi, says his fellow activists have a decision to make: “Are we trying to be a good steward of the rules as they exist -- which I think is a complete waste of time -- or are we pushing for transformation of society?” asked Kali Akuno, of Cooperation Jackson. Akuno warned against falling into “the Syriza trap,” in which radicals wind up carrying out the policies imposed by banks and big business.
Posted by Kali Akuno at 4:12 PM No comments: