Posted by Kali Akuno at 4:06 PM No comments:

Posted by Kali Akuno at 8:59 AM No comments:

The Decline: The Geography of a Recession

Posted by Kali Akuno at 5:41 PM No comments:

Beyond Foreclosure Fraud: Moving to Take Back the Land through Strategic Action 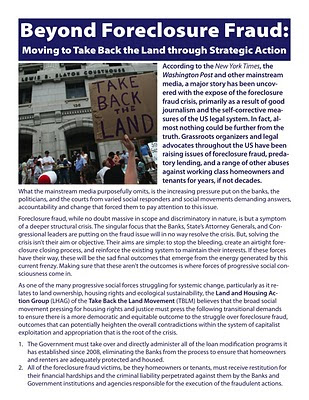 According to the New York Times, the Washington Post and other mainstream media, a major story has been uncovered with the expose of the foreclosure fraud crisis, primarily as a result of good journalism and the self-corrective measures of the US legal system. In fact, almost nothing could be further from the truth. Grassroots organizers and legal advocates throughout the US have been raising issues of foreclosure fraud, predatory lending, and a range of other abuses against working class homeowners and tenants for years (if not decades). What the mainstream media purposefully omits, is the increasing pressure put on the banks, the politicians, and the courts from varied social responders and social movements demanding answers, accountability and change that forced them to pay attention to this issue.

Foreclosure fraud, while no doubt massive in scope and discriminatory in nature, is but a symptom of a deeper structural crisis. The singular focus that the Banks, State’s Attorney Generals, and Congressional leaders are putting on the fraud issue will in no way resolve the crisis. But, solving the crisis isn’t their aim or objective. Their aims are simple: to stop the bleeding, create an airtight foreclosure closing process, and reinforce the existing system to maintain their interests. If these forces have their way, these will be the sad final outcomes that emerge from the energy generated by this current frenzy. Making sure that these aren’t the outcomes is where forces of progressive social consciousness come in.

As one of the many progressive social forces struggling for systemic change, particularly as it relates to land ownership, housing rights and ecological sustainability, the Land and Housing Action Group (LHAG) of the Take Back the Land Movement (TBLM) believes that the broad social movement pressing for housing rights and justice must press the following transitional demands to ensure there is a more democratic and equitable outcome to the struggle over foreclosure fraud, outcomes that can potentially heighten the overall contradictions within the system of capitalist exploitation and appropriation that is the root of the crisis.
1. The Government must take over and directly administer all of the loan modification programs it has established since 2008, eliminating the Banks from the process to ensure that homeowners and renters are adequately protected and housed.
2. All of the foreclosure fraud victims, be they homeowners or tenants, must receive restitution for their financial hardships and the criminal liability perpetrated against them by the Banks and Government institutions and agencies responsible for the execution of the fraudulent actions.
3. All the homes and housing units currently being processed and/or warehoused by Banks saved by the TARP program be publicly identified and utilized as “public housing” and opened to inhabitation by the millions of individuals and families displaced from their homes or the tens of thousands languishing on public and/or affordable housing waiting lists.
4. That the aforementioned public housing units be transformed into cooperative housing units and land trusts to be directly governed and administered on a local level by the impacted families and communities.

None of these demands can be realized without the concerted direct action of those most affected and those in solidarity in critical mass. To push these demands forward, the Land and Housing Action Group is encouraging all progressive forces pressing for systemic change to join us in calling and organizing for the following courses of action:
1. Nationally coordinated days of action against the Banks, Government Institutions like Fannie Mae and Freddie Mac, Congress and the Obama administration to utilize the millions of foreclosed properties as public housing for the countless displaced and homeless families.
2. A nationally coordinated rent strike of homeowners and renters facing foreclosure and eviction to press the Banks and the Government to meet the aforementioned demands.
3. Community occupations of the millions of vacant properties and land to transform into cooperative housing and land trusts to ensure the sustainability of our families and communities.

Posted by Kali Akuno at 8:07 PM No comments:

Posted by Kali Akuno at 8:02 PM No comments:

Posted by Kali Akuno at 7:53 PM No comments:

Posted by Kali Akuno at 7:35 PM No comments:

View Vanassa Faraj and Wafa Azari of Movement to End Israeli Apartheid - Georgia (MEIA - G) speak on a direct action and attacks suffered at hands of zionist supporters in the course of a protest of the Jewish National Fund (JNF) conference in Atlanta, GA on Sunday, October 10, 2010. The demo was organized by the Stop the JNF Campaign and supported by organizations like MEIA - G and others in the Atlanta Metro Area.

To see direct video footage of the demonstration view the link below. Eight people among the protesters present entered the JNF conference to denounce it and its false claims to be an "environmental" organization. The JNF is a major historic and current player in the colonization of Palestine and the dispossession of its people's from their native lands.

For more information on the Stop the JNF Campaign visit http://stopthejnf.bdsmovement.net/ email stopjnf.us.@gmail.com.
Posted by Kali Akuno at 11:21 PM No comments: