The Whole World is Watching the Washington State's Waterfront! 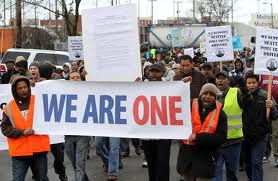 Over the first two weeks of February, about a quarter of the drivers who move intermodal shipping containers in and out of the port of Seattle participated in a strike against unfair wages, hours, and working conditions. This largely East African immigrant workforce has demanded living wages, basic safety on the job, the right to join a union, the right to basic health and injury compensations enjoyed by other workers, the right to be paid by each hour of their lives they give to the industry rather than by piece work, and to not be legally penalized by the state for decisions made by their employers rather than by them.

As simple and modest as these demands seem, they nevertheless fly right in the face of US labor relations law, and cannot be met unless this apartheid law is changed.
US law, both state and federal, traditionally regarded all unions as illegal organizations throughout most of US history. Even where it was considered legal for unions to exist, it was still generally illegal for them to conduct any type of economic activity whatsoever. Advocates of unionization were generally punished in the same manner as abolitionists or as those who challenged the Jim Crow laws: with firings, beatings, lynchings, and jail time.

Such was the status quo until 1933, when the workers uprisings of the Great Depression forced the federal government to pass the National Recovery Act (revised two years later into the National Labor Relations Act or “NLRA”) which legalized unionization and collective bargaining for employees. The act even said that employees could not be fired or punished specifically for advocating or participating in unionization, and that employers had to recognize and bargain with a union if a majority of their employees were part of it.

So, anyone who picked cotton or vegetables, or washed clothes, or cleaned houses for a living were excluded from the NLRA and confined to feudal like laws that declared their union organizing efforts illegal and subject to persecution as they always had been. So it remains to this day.

This apartheid legal code received no serious recorded challenge until the heroic Salad Bowl Strike and other farm-workers uprisings of the 1970s forced one state to pass the California Agricultural Labor Relations Act of 1975, legalizing collective bargaining for agricultural workers in California. The name of Cesar Chavez became a household word as a result.

A NEW CHALLENGE TO APARTHEID!
As the labor uprisings of the 1930s have faded into distant memory, employers have systematically expanded the size of the bottom tier of this two tiered labor code, by classifying more and more workers outside of its narrow legal definition of “employee”, particularly by forcing them to work under the legal category of “independent contractor”, a term that appeals particularly to followers of the “middle class” and “American Dream” narrative.

But now, the bottom rail is rising again! The underpaid, overexploited port drivers of Washington State, through their independent association, and working in coalition with the Teamsters and with members of the Washington legislature who come from the ranks of organized labor, introduced two bills into Washington State’s 2012 legislative session: HB 2527, which would place the responsibility for legal fines levied by law enforcement against unsafe intermodal chassis on the companies which own those chassis rather than on the drivers who are directed to haul them and must work as directed, and HB 2395, which would re-classify port drayage drivers in Tacoma and Seattle from the legal category of “independent contractors” to that of “employees”, finally recognizing their rights.

All members of the working class should strongly support this historic legislation. If enacted, it will be the first major legal blow against apartheid labor law in the US since 1975, and will set a precedent which will improve chances for all workers movements throughout the US!

Under usual conditions, neither of these bills would have gotten far in any US legislature. But the two week port drivers strike in Seattle, following the recent December 12th shut down of many West Coast ports by the Occupy movement, created a unique political climate of urgency, in which the employee classification bill actually passed the state house by a margin of 52 to 43 on February 11th! The bill´s opponents were able to stall it in the state senate until the regular 2012 Washington legislative session ended on March 8th. But this was not the end!

Due to the extreme controversy of the so called “budget crisis” (known to the working class as THE AUSTERITY CRISIS), the Washington legislature was unable to agree on a budget to run the state for the rest of the year, and has had to go into an emergency extended “Special Session”, for as long as it will take to approve this budget. This session has all the same law making powers of a regular session, and the passage of this legislation is still possible, if we act now!

Send a letter of solidarity to the Seattle Port Truckers Association, telling them that your organization is willing and preparing to take whatever action is necessary to reinforce their struggle if Washington´s HB 2395 and its Senate companion bill are not enacted and signed into law by Cesar Chavez’s birthday, March 31, 2012!
(206) 338-8739 , www.seattleporttruckers.org , info@seattleporttruckers.org
3815 South Othello Street #100-196 Seattle, WA 98118.

Let them and their colleagues know we are serious!
Posted by Kali Akuno at 5:47 AM 1 comment: