This is Hell: From the Wreak Age, discussion on the Jackson Rising book


https://soundcloud.com/this-is-hell/episode-976-from-the-wreck-age
Posted by Kali Akuno at 3:38 PM No comments:

We Can Build a Better World from the Ground Up

This article originally appeared in IN THESE TIMES on October 26th, 2017 for their November 2017 Issue.

The article had the title "We Can Build a Better System from the Ground Up". 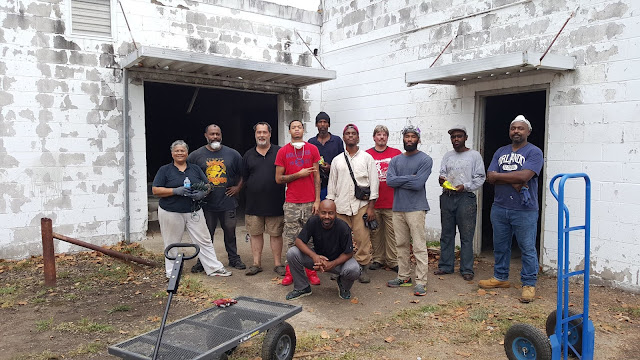 For the first time, virtually all of humanity is incorporated into one social order and one mode of production: the capitalist world-system. More people are involved in commodity production and exchange—as wage-laborers, indentured servants, prisoners or slaves—than ever. This means that the working class is larger and potentially more powerful than at any other point in history.
So I agree with Bhaskar that the working class is in a central position to transform the world-system. He is also right that the working class is fragmented, for all the reasons that Kathi mentions (and then some).
Social perceptions and consciousness can change rapidly, given the right conditions, as the past seven years of global events demonstrate. The instability we are now experiencing—wars, ethnocentric and religious violence, terrorism, mass migration, and the rise of right-wing nationalism and outright fascism—is accelerating the transformation of consciousness and political action the world over. On the progressive side, we have seen millions of working-class people challenge and even topple dictatorships in Africa and Asia, and millions mobilize to confront growing inequality and dispossession in the democracies of Europe and North America. This shows that even without mass left organizations, the working class can act as a political force.
But for the most part, the Left has been eviscerated through political repression, capitulation to neoliberalism and the trappings of electoral politics that serve to legitimize rather than challenge the system. In places like Egypt, Libya and Syria, this evisceration led to the reorganization of dictatorships. It also means that the gains in Europe and the United States have been limited to shifts in the public discourse about class and inequality, and relatively minor progressive policy shifts. More is clearly needed.
Unfortunately, in much of the world (including the United States), the Right is doing better than the Left at reaching working people who feel they are losing their status, privileges and birthrights. For the working class to play a transformative role in society, we must build our own left-oriented organizations and institutions, and quickly.
These organizations and institutions must not aim to recreate the social-democratic or electoral routes to power of the past century. Instead, the Left must build a new type of revolutionary working-class organization. This type of organization must learn from and transcend the 20th century's failures of both the vanguard—with its emphasis on centralism over democracy—and social-democratic parties—with their faith in representative democracy and the neutrality of capital.
We must be prepared to both build and fight: fight the impositions of capital where we work, live, play and pray, and build, from the ground up, institutions on the basis of social solidarity and ecological regeneration, such as worker cooperatives and time banks.
Kathi’s emphasis on coalitional politics may go too far in decentering capitalism, but she is right that a new working-class movement must take on multiple modes of domination, oppression and hierarchy. In my view, capitalism is the nexus of oppression in our era, and fashions and conditions all other forms of oppression in its own service—colonialism, ethnocentrism, racism, white supremacy, patriarchy, heterosexism, ageism, ableism, et al. Of course, other systems of oppression have their own logic and animus, and some, like patriarchy and heterosexism, are much older and socially entrenched than capitalism.
This new type of organization must recognize that working-class people aren’t just one-dimensional beings: They have concerns, needs, wants and desires that go beyond wages and work conditions. It must also recognize that class position is conditioned by race, ethnicity, nationality, language, religion, sexuality, gender, age and physical ability—these concerns are not just “add-ons” to the class struggle.


On this basis, our movement can advance a vision of a wholly new system, a new communist civilization, rather than settling for an exploitative system with the wherewithal to accommodate more Black presidents, Queer soldiers and Woman preachers. We can and must do better. The suffering mass of humanity, and all the life forms capitalism is rapidly extinguishing, demand nothing less.

Posted by Kali Akuno at 6:50 AM No comments:

To Govern or Transform: Some Reflections and Lessons from Jackson, MS

A discussion with Davey D of Hard Knock Radio about surviving natural disasters, being self sufficient and the United States government surveillance of Pro-Black organizations and individuals.
Posted by Kali Akuno at 2:20 PM 1 comment: