Moving Forward: A One-Year Reflection and Next Steps for the National Take Back the Land Movement 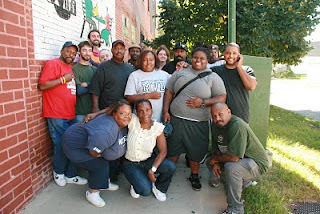 From September 10 through 12, a year after gathering in Atlanta, Georgia to discuss how to combine forces on a national level to build and inspire a transformative movement to change land and property relations in the US, the organizations of the Land and Housing Action Group (LHAG) – the Chicago Anti-Eviction Campaign, Malcolm X Grassroots Movement, Survivors Village, and Take Back the Land (Miami) – met in Chicago, Illinois to discuss what’s been done, how things have progressed, what was accomplished, where were going, and how we seek to get there in the period ahead.

In this discussion, we also met with allied organizations from the mid-west region that embarked on the journey to Take Back the Land and realize the human right to housing, these being Take Back the Land (Madison) and the Toledo Foreclosure Defense League. Collectively we arrived at some basic conclusions about the state of social dynamics since September 2009, including:
• That despite decreased coverage in the mainstream media the foreclosure and eviction crisis is in fact deepening, resulting in ever increasing homelessness, both hidden and visible
• That the banks, transnational corporations, and both major political parties are intent on advancing, rather than retreating from, neo-liberal strategies and policies, like PETRA (link), to resolve the housing crisis in favor of the interests of finance capital over and above those of the working class and the poor who are being displaced and dispossessed by the crisis
• That despite the lack of media coverage, there has been a tremendous amount of resistance against displacement, including non-compliance with foreclosure and eviction notices, quite squats, land reclamations for community gardens and local food security, and protest initiatives against new measures to destroy public housing, however the bulk of these resistance measures remain individualized and scattered

Resolved to deepen the reach and impact of the Take Back the Land Movement to address the crisis and realize our human rights, participants in the meeting agreed to execute the following measures to consolidate, strengthen, and advance the movement:
• To expand the Land and Housing Action Group
• To formalize a division of labor within the Land and Housing Action Group
• To create a broader movement Coordinating Committee, composed of Local Action Groups, Strategic Partners, Allied Organizations, and individuals committed to the principles of the Take Back the Land Movement to strengthen communication and collaboration
• To create several national working committees to strengthen overall coordination
• To pursue funding to support a national coordinator, movement trainings in various areas (direct action, demand development, human rights, monitoring, etc.), and base building initiatives in several strategic cities and/or regions
• To engage in an October action offensive in collaboration with the International Alliance of Inhabitants
• To conduct a Demand and Strategy Development meeting in December
• And to conduct a national speaking tour to spread the message of the movement and inspire more families, communities and forces of resistance to engage in transformative action

We believe that little by little, and step by step we are playing a part in building the transformative movement this country so desperately needs and which its oppressed, exploited and excluded peoples, so rightly deserve. But, we have a long, long way to go. We invite all progressive forces to join us in building this movement during the next phase of struggle by supporting the October offensive, or organizing a teach-in, speaking event, or fundraiser for the LHAG in your community.

Donations to the LHAG/TBLM can be made to the US Human Rights Network c/o LHAG and mailed to 250 Georgia Ave. Suite 330, Atlanta, GA 30312. Donations can also be made via paypal at www.ushrnetwork.org.