Local Struggles: Organizing for the National Plan of Action for Racial Justice at the City, County, and State Level 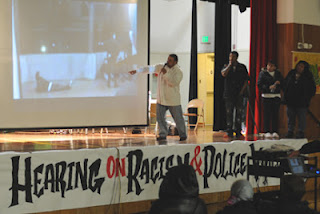 The fight for a National Plan of Action for Racial Justice is not just a fight targeting the federal government. Nor is it a fight to just create more government policies and institutions for monitoring rights abuses with few resources and no real accountability measures. This fight is ultimately a local fight, one that must be waged and won on every block, neighborhood, city, county, and state.

Some of the initiatives of self-defense that are suggested entail:


Some of the offensive campaign initiatives suggested entail:

·         Campaign for City, County, or State level Plans of Action for Racial Justice that would entail:
o   The creation of comprehensive Police Control Boards, that are elected by local communities and possess definitive authority over the police, including the power to fire and take legal and other corrective action against the police for violations of human rights.
o   Local control ordinances and legislation that would specifically stop repressive policies like “stop and frisk”, racial profiling, programs like secure communities or S COMM of Homeland Security[1], and local law enforcement collaboration with Fusion Centers[2].
o   The creation of Human Rights Commissions that would legally be empowered to ensure that local, state, and regional laws and practices comply with international law and standards of protection for oppressed peoples and groups (racialized communities, Indigenous peoples, oppressed peoples and nations, immigrants, etc.).
o   The creation of Human Rights Charters for city, county, and state governments that refashion the articles of incorporation and constitutions that establish the legal framework for these entities to ensure maximum protections for Indigenous and oppressed peoples residing in these locales.

These are just a few ways in which the demand for a National Plan of Action for Racial Justice can be and is relevant to local, statewide, and regional struggles for social justice. The Malcolm X Grassroots Movement (MXGM), Black Left Unity Network (BLUN), and the National Alliance for Racial Justice and Human Rights (NARJHR) calls on every individual, organization, coalition, alliance, or network that believes in racial justice and is fighting to liberate oppressed peoples in this country to join us in the effort to fight for a National Plan of Action for Racial Justice to ensure that there are NO MORE TRAYVON MARTINS.

For more information on the No More Trayvon Martins Campaign visit www.mxgm.org.
To sign the petition for a National Plan of Action for Racial Justice visit http://mxgm.org/trayvon-martin-is-all-of-us/.

To endorse the campaign email kaliakuno@mxgm.org. To get started on organizing on its behalf see the tasks outlined in our Appeal Letter at http://mxgm.org/no-more-trayvon-martins-campaign-appeal/.


[1] For more information on the Secure Communities program visit http://www.nnirr.org/~nnirrorg/drupal/End-S-COMM.
[2] For more background on what Fusion Centers are visit http://www.aclu.org/technology-and-liberty/whats-wrong-fusion-centers-executive-summary.