The National Plan of Action for Racial Justice: Short explanation of what it is. 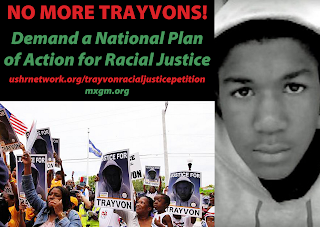 As stated in the “Trayvon Martin is All of US” statement (see http://mxgm.org/trayvon-martin-is-all-of-us/), “the murder of Trayvon Martin is no isolated tragedy”. New Afrikan and/or Black people have been fighting police brutality and vigilante terrorism in one form or another for centuries. Two of the long standing demands of the Black community have been community control over the police and the end to the police occupations of our communities. Attempts to placate these demands have been made in numerous cities throughout the United States in the form of civilian review boards and the hiring of Black police. After 40 years of experimentation with these methods, it is clear that they have failed to stop police brutality and white supremacist vigilante violence against Black people.  It is time that we demand more. It is time that we demand structural change and that is where the National Plan of Action comes in.

The Malcolm X Grassroots Movement is demanding a National Plan of Action for Racial Justice to ensure that the US government is held accountable for its policies and practices that threaten or undermine the human rights of Afrikan and other oppressed peoples in the United States, including Indigenous Nations, Xicanos, Puerto Ricans, Hawaiians, Arabs, immigrants, Muslims and other targeted communities. The National Plan of Action for Racial Justice is a comprehensive plan that will address the totality of structural and institutional racism and how they violate the human rights of oppressed peoples.

What is a National Plan of Action?

In essence a National Plan of Action is a plan created and implemented by a National or Federal government to improve its human rights practice to ensure that the rights of all persons under its jurisdiction are respected, protected, and fulfilled. Such a plan acknowledges that improvements in all facets of governance are needed in order for human rights to be fully realized. In order to make these improvements, National Plans call on governments to:

1.      Develop a comprehensive work plan, with a concrete timeline, goals, and measurable benchmarks, to resolve social issues where a government is not in full compliance with international law and standards in the application of human rights.
2.      Ratify additional human rights treaties and standards where needed to ensure maximum protections and the realization of rights.
3.      Align domestic law with international law to ensure more effective incorporation of international standards into domestic practice.
4.      Establish national human rights institutions to facilitate, administer, and monitor the implementation of the plan.
5.      Institute a comprehensive human rights education program to ensure that all government officials, on all levels of government (local, county, and state level) are aware of their human rights obligations and insure that all persons and institutions of civil society are aware of their rights.
6.      Create social policies and programs that address core areas of concern regarding the protection and fulfillment of human rights and seek to improve the quality of life overall, particularly for vulnerable groups and social sectors.

The National Plan of Action concept is a product of the 1993 World Conference on Human Rights held in Vienna, Austria. It was promoted by the Vienna Declaration and Programme of Action (VDPA) and was put forward as a means for all national-states to take deliberate action to improve their human rights record and practices. The development of National Plans of Action to combat racism and racial discrimination is a product of the Third World Conference Against Racism held in Durban, South Africa in 2001. These “racial justice” plans were promoted by the Durban Declaration and Programme of Action (DDPA) and have been adopted and utilized by a number of countries including Australia, Canada, Ireland, and South Africa.

Where these Racial Justice Plans have perhaps been used most effectively is in South America, specifically by Afro-descendent organizations and social movements. Afro-descendent organizations in Colombia, Brazil and Venezuela have used the DDPA and National Plans of Action to win constitutional recognition for ancestral lands, regional autonomy and special programs for cultural preservation, educational advancement, and community development. These examples and the organizing strategies employed to win these gains are the inspiration the Malcolm X Grassroots Movement draws from in our campaign to attain a National Plan of Action for Racial Justice in the United States.

Join Us. Build the No More Trayvons Campaign for a National Plan of Action for Racial Justice

The demands articulated in the “Trayvon Martin is All of US” statement are only a portion of the demands that would be included in the National Plan. Comprehensively the National Plan would address the right of self-determination; economic, social, and cultural rights; civil and political rights; racial profiling, stop and frisk, mass incarceration, state surveillance, and political repression; political prisoners and prisoners of war; environmental racism; and  much more.

To win this demand, we are going to have to secure millions of signatures, organize individuals and communities in support of the demand on a mass level, build a broad coalition, and apply maximum pressure on the administration of President Obama to yield to the demand and implement a National Plan of Action for Racial Justice. Join the Malcolm X Grassroots Movement (MXGM), Black Left Unity Network (BLUN), National Alliance for Racial Justice (NARJHR), and the CERD Implementation Task Force of the US Human Rights Network (USHRN) in raising these demands and building this movement.

You can start by officially endorsing the campaign and committing to working on the strategies and tasks outlined in our Appeal Letter (see http://mxgm.org/no-more-trayvon-martins-campaign-appeal/ for more details). To endorse the campaign email kaliakuno@mxgm.org. To sign the Petition visit http://www.ushrnetwork.org/content/webform/trayvon-martin-petition.
For more details visit www.mxgm.org or visit us on facebook at https://www.facebook.com/#!/MXGMnational.